Homepage > D-Fend Solutions Blog > Caterpillar to Butterfly is Like the Rogue Drone Lifecycle?!

Caterpillar to Butterfly is Like the Rogue Drone Lifecycle?!

As a child, I was fascinated by the poster in science class that showed zoological lifecycles. Seeing how an egg became a tadpole and then a tadpole transformed into a frog was fascinating. It’s the same thing regarding a caterpillar hatching from an egg, entering the chrysalis stage and then emerging as a beautiful butterfly.

Discussion of “lifecycles” isn’t confined to the natural world. This term is often applied to innovative technology.

Maybe it seems like a strange comparison, but D-Fend Solutions’ counter-drone incident lifecycle actually has much in common with the natural metamorphoses described above. Like those natural processes, each stage in D-Fend’s drone incident lifecycle is dependent upon the previous stage. For instance, our flagship counter-drone takeover system, EnforceAir, cannot locate and track a drone until it first detects the drone. Similarly, mitigation occurs only after the detection process is complete. 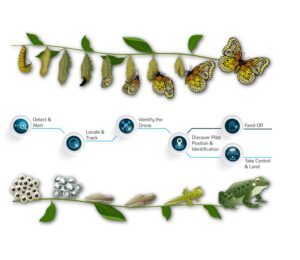 Also, during the process of the chrysalis, the caterpillar becomes immobile and is stripped down to its very essence. This immobility reminds me of one possible final stage of D-Fend’s lifecycle, when a rogue drone is taken over and landed in a pre-determined safe zone and the pilot is unable to connect with or move his inert drone.

Of course, there are many differences, too. Following chrysalis, a beautiful butterfly eventually emerges and flies away. D-Fend Solution’s takeover stage permanently grounds the captured drone.

Process flexibility is another important divergence. Barring an unforeseen circumstance, such as an attack from another animal, a tadpole will become a frog and most types of caterpillars change into butterflies – each stage is rigidly defined and fixed, the outcome is known.

Our EnforceAir system, in contrast, empowers system operators to choose how rogue drone incidents will conclude. It offers alternatives: either a fend-off, sending the rogue drone back to its point of origin, or a complete takeover, which ends with the drone flying a pre-determined route that culminates in a safe landing.

The importance of providing counter-drone system operators with a choice was validated when my recent article about fend-off and takeover, as well as all of the drone lifecycle steps, was published in Security Magazine.

Other, more traditional methods of counter-drone mitigation oftentimes do not allow system operators to choose the final outcome and these technologies cannot guarantee a positive conclusion to the drone incident lifecycle.

Jamming, for instance, may result in a variety of outcomes, with the drone either:

The surrounding environment must also be considered. Jamming can disrupt necessary communication systems in the area.

The use of a kinetic solution – such as bullets, lasers, nets, magnets, other drones, etc. – can successfully conclude the drone incident lifecycle in some instances. If the projectile misses the drone, though, the sUAS continues along its potentially destructive path and the projectile may cause collateral damage, depending on what it hits or where it lands. Unlike the caterpillar to butterfly metaphor, collateral damage is certainly not a beautiful ending to the counter-drone process.

Jeffrey Starr is the Chief Marketing Officer at D-Fend Solutions. He brings a track record of generating revenue and building market leadership through visionary business strategies, inspired marketing and insightful direction for rapid and sustained growth. Fast-growing companies in the information, security, compliance and risk management sectors have employed Jeffrey in CMO and executive roles.