As we get older, it seems that we celebrate the New Year more frequently, doesn’t it?  I mean, it feels like the year gets shorter and shorter, even though it really doesn’t. If you take into consideration a 5-year-old, a year is 20% of the kid’s life. In my situation, a year is… well, let’s not go there, but it’s more than 1%. 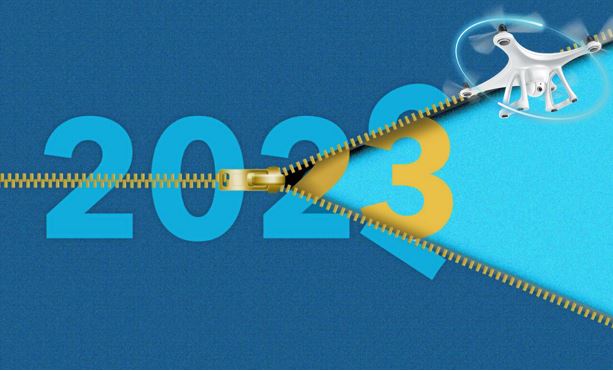 And yet, even though 2022 feels like a short year, a lot happened, particularly as we look in the drone scenario, and this is an even more relevant issue nowadays. Let’s dig into some of the main trends that took place in 2022, as well as concerns and expectations ahead.

The Russia-Ukraine war highlighted how low-cost, commercial drones can carry explosives and cameras for military units during warfare. In a recent, fascinating article in The Atlantic, award-winning writer Mark Bowden, author of Black Hawk Down, Guests of the Ayatollah, and The Finish,  describes the impact of drone warfare:  “For years, military strategists have anticipated the arrival of the so-called drone swarm, a large cluster of small flying machines that will herald a new era of intelligent warfare.” But Bowden also points out how countermeasures become top priority once the challenge is clearly recognized: “Just as militaries adapted to heavy machinery and the trench, they will find a solution here.”

Besides drones purposely used in wars and conflicts, there are many other scenarios where drones can cause major incidents. Two years ago, D-Fend launched the Drone Incident Tracker, where we compile information from public domain sources, representing just a portion of actual drone incidents around the world, since many drone incidents are not publicly known. The tracker compiled more than 20% incidents in 2022 over 2021.

The incidents covered include intentional attacks, smuggling, espionage, and more, in a range of different sectors, including airports, borders, and prisons. Drone incidents can have a devastating impact on daily life. For example, in September, thousands of people were left without power for up to three hours in Queensland, Australia, after a food delivery drone crashed into powerlines.

DRONELIFE Feature Editor, Jim Magill, highlighted how “all of these incidents around the world have prompted national governments to take more robust counter-drone measures. In the United States, the White House made protection of critical infrastructure a key part of its recently announced Counter-UAS National Action Plan.”

While drones bring many well-known applications and benefits, each use case also carries associated risks. Take the obvious example of fast product delivery, following Amazon’s recent moves in drone-delivery to consumers. Even such positive advances also bring concerns about accidents, incidents, disruptions, or privacy. In a recent article, Morning Consult elaborated on “trust issues” around drone deliveries, according to their 2022 survey: “4 in 5 adults said they were concerned about the unsuccessful delivery of items by drones, while more than 3 in 5 said they were worried about their personal or data privacy related to using drones for delivery.”

With increased awareness on the risks from drones, governments are working on better understanding the threat and countermeasures. The White House released the Domestic C-UAS National Action Plan, and Congress is reviewing legislation to “safeguard the homeland from the threats posed by unmanned aircraft systems” (Senate Bill S.4687).

In a recent article at the Inside Unmanned Systems publication, Dawn Zoldi, a US Air Force Veteran and thought leader on drones and defense, reviews 2022 and what to expect going forward. She points out that Brad Wiegmann, Justice Department deputy assistant attorney general in the National Security Division, warned the US Senate that “it’s ‘only a matter of time’ before a drone attacks a mass gathering in the country,” during a June 2022 hearing focused on the evolving threat that drones pose to the U.S.

As we head into the New Year, let’s hope for continued positive legal and regulatory steps to help prevent dangerous drone incidents. Combined with counter-drone technology innovation, we can enable a flourishing drone-powered society, supporting the growth of safe and secure drone adoption.

May 2023 be a Year of Drone Prosperity Protected by Counter-Drone Defense!

Sandra Welfeld is the Marketing Content and Communications Lead at D-Fend Solutions. A senior marketing executive with strong passion for all things content, Sandra brings vast experience in B2B marketing, while focusing on translating the “tech” into marketing, whether in blog posts, brochures, or social media.