UK Military Should be Ready to Encounter Drones in Unexpected Places

Many of the traditional counter-small, unmanned aerial systems (C-sUASs) were designed for the battlefield. It seemed natural for military personnel to counter drones with kinetic force or high-power jammers.

The fighting and rogue drone deployment often took place in urban environments, where traditional counter-drone solutions are much less effective. Sensitive environments require a surgical and innovative anti-drone defence system that can cope with detection challenges around tall buildings and other objects, and surrounding RF noise.

This approach should prevent potential collateral damage associated with kinetic solutions, without disrupting adjacent communication signals with jammers, whilst distinguishing between authorised and adversarial drones.

Increasingly, military units are moving away from traditional jammer-based or kinetic counter-drone solutions, as they recognise the potential for military units to encounter drones in unfamiliar scenarios that are different from the urban battlefield.

Military Aid to Civil Authorities (MACA) means that UK military personnel could for instance be deployed to help police or to protect huge gatherings at large venues, etc. The UK Ministry of Defence explained MACA in a medium.com article:

“Military Aid to Civil Authorities aka MACA, is the help and support provided by th 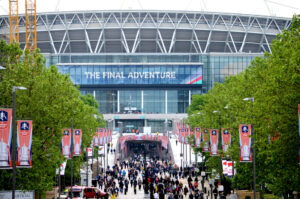 e Armed Forces to authorities in the UK, like the Police, NHS or local authorities. The government can call on the military to assist at times of need, to share the burden on civil organisations.

MACA may include assisting other government departments for urgent work of national importance such as responding to emergencies, maintaining supplies and essential services.”

When assisting as part of a MACA request, the military will likely be in a new environment, surrounded by members of the public, transportation, etc. They will have to expect the unexpected. If they need to operate a counter-drone system, they will not be able to risk using a kinetic solution for fear of causing collateral damage. Jamming can also be suboptimal, due to disruption of surrounding communications systems.

Additionally, as part of MACA there is a good chance military and personnel will require operational flexibility while helping to counter the rogue drone threat. If deployed to guard a large parade or political gathering, for instance, military personnel may need to quickly switch between deployment options: maybe from a vehicular mobile counter-drone deployment to ground-level tactical, or even high-level stationary.

The ideal counter-drone solution should offer the ability to speedily move between deployment options anywhere at any time.