A scary collision between a Chilean Navy helicopter and an unmanned aerial system (UAS) has once again highlighted the tremendous risk to aircraft posed by drones.

According to DroneXL, the navy helicopter collided with a DJI Mavic Air 2 drone. “Based on the photos, it appears that the drone and helicopter must have hit each other at a relatively high speed, with the unmanned aircraft going straight through the windshield of the Bell UH-57B (Bell 206B) JetRanger III helicopter.”

The article adds: “Photos show that the drone crashed through the windshield…seemingly hitting (a passenger) in the face.”

Aviation International News (AIN) reports that the helicopter made an emergency landing and the injured crew member was transported to the hospital with “moderately serious” injuries. A photo of the incident depicts a bloody mask. It is unclear who piloted the rogue drone.

Experts have long warned about the dangers that can result from drones colliding with aircraft.

A study from the Canada National Research Council’s Aerospace Research Center that concentrated largely on planes found that mid- and large-size drones with heavy payload capabilities can do significant damage to aircraft, including shattered windshields, penetration and inhalation hazards, lost optics and the need for emergency landings after impact. 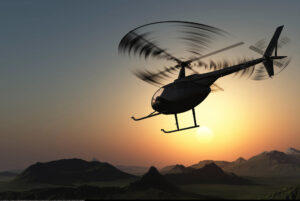 At low speeds of around 140 knots, aircraft that collided with drones showed plastic damage and extensive deformation to the skin, as well as damage to the vessel’s underlying honeycomb structure. At higher speeds of 250 knots, severe deformation of slat curvature, secondary damage to the leading edge, and even penetration of drone debris into the aircraft’s fractured area were observed.

Unfortunately, the mere sighting of a drone in the vicinity of an airport or aircraft is enough to spark fear, often causing costly delays. Ninety-two (92) drone-related incidents were recorded in German airspace in 2020, according to a recent article in Homeland Security Today, with one-third of those incidents leading to severely restricted air traffic:

Such restrictions have consequences. The spacing between arriving and departing aircraft may have to be increased, or it can mean that specific areas, such as individual runways, cannot be used. In extreme cases, no take-off or landing clearances can be issued, which is tantamount to an airport closure. At the beginning of 2020, Frankfurt Airport was out of service for four and a half hours in total, following two occurrences with drones.

Airports require a robust counter-UAS system that will detect and mitigate rogue drones, while preserving continuity and preventing delays.