Drone tracking methods and the associated technology are constantly evolving, but there is an important capability that many security teams are currently overlooking…

Drone detection apps have popped up in recent years. Most of these are simple user interfaces that integrate wit 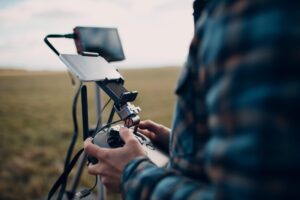 One notable exception is AirMap, an aeronautical data & services provider that enables app users to “view publicly-shared flights happening around the world.” This can be helpful, but what about rogue drones that are not reported/publicly shared?

Radars have been a traditional favorite of security teams, but a DroneDJ article correctly notes that many radar systems possess limitations, making it difficult for organizations to effectively monitor urban or sensitive environments:

“Radar is best used in open areas as trees and other ground objects can show up on the radar, creating false readings. Many radar systems today have a vertical detection range of about 10 to 30 degrees, which is not enough when trying to detect drones flying at all sorts of heights.”

Radio frequency (RF)-based, cyber-takeover solutions track the communication signals used by commercial drones, without false positives or the need for line of sight. It is then possible to decode the telemetry signal to determine the type of drone and extract the drone position with GPS accuracy. This includes the take-off position near the pilot in real-time.

This often-overlooked feature, which is NOT available via many of the traditional drone tracking solutions, is a must-have.

For instance, for military forces engaged in constant asymmetrical warfare with terror groups, merely detecting rogue drones, and even mitigating them, is not enough. Terrorists can easily order another cheap commercial drone to replace the one that was lost. Stopping this potentially deadly cycle requires quickly discovering the location of the terror cell(s) launching the drones.

Border guards and prison personnel face unending smuggling attempts via drone. Tracking and then mitigating these drones is crucial for preventing dangerous contraband from entering, but if the pilots are not located, attempts will continue.

Security personnel evaluating C-sUAS systems should carefully consider the pros and cons of the different types of drone tracking systems and ensure that their eventual pick offers geolocation of the drone pilot.