Protecting the Playing Field (& the players, staff, and fans) from Drone Threats

While drone incidents at airports have garnered headlines recently, see Ilana Brodesky’s blog The Challenge of Drone Incidents at Airports, there is another highly populated environment that is particularly vulnerable to the growing threat of drone incidents and attacks: Stadiums and Arenas.

Data from our incident tracker shows numerous examples of incidents in which unauthorized drones posed a global safety threat, caused delays to games, or even caused events to be canceled. In this blog, I focus on the situation and latest developments at stadiums and arenas in the U.S. 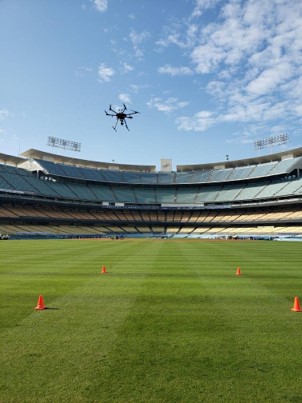 There are 183 stadiums in the United States with seating capacities of at least 30,000, as well as many smaller stadiums. For some drone enthusiasts or casual pilots, an open-roof stadium might be wrongly seen as a tempting place to assess their capabilities or simply photograph or video a game. As a result of the potential danger this poses (imagine the havoc caused by a single drone gone awry in a crowded stadium, or a swarm of them at once), the FAA has enacted specific regulations to address this problem.

FAA regulations state that unauthorized drones are not permitted to fly in and around stadiums with 30K or more seats from one hour before until one hour after the scheduled time at Major League Baseball, National Football League, NCAA Division One football games, NASCAR Sprint Cup, Indy Car, or Champ Series races.

To make the drone restrictions known to fans and communities, the FAA and Stadium Managers Association (SMA) ran a campaign with the slogan:

Despite this effort, drone threats and incidents at sporting events persist. And this campaign only addresses non-malicious drone incidents. The potential threat from intentional nefarious drone attacks is in another league!

On July 16, just a day before an unauthorized drone hovered over Yankee Stadium right field for 15 minutes during a game which the Yankees eventually won 14-1 over the Boston Red Sox, Reuters correspondent David Shepardson reported on how drone threats are being met with renewed urgency by lawmakers, the Biden administration, and sports leagues.

The Department of Justice and Department of Homeland Security and their respective security agencies currently have mitigation authority to disable or destroy threatening drones. These authorities, which were put in place in 2018, are set to expire this October. To keep up with the growing number of registered drones and to combat the proliferation of the drone threat, the Biden administration is working with Congress to renew the existing authority and broaden its powers.

“will play an important role in helping to ensure the safety of major sporting events, including the safety of the millions of American fans who attend these events each year.”

They applauded the part of the Biden plan that provides for a pilot program “extending counter-drone authority, under appropriate oversight and training, to certain state and local law enforcement officials involved in protecting mass gatherings at sporting events.”

These Executive developments are a positive step toward safer airspace but will need support from appropriate technologies for controlled and safe implementation. To hit the rogue drone problem out of the ballpark (and land it safely), promote the safety of attendees,  and allow for continuity of the game, an advanced C-UAS solution will be needed by authorized security personnel protecting such events to overcome such incidents in a safe and controlled manner.

Meryl Dzikansky is a marketing communications specialist at D-Fend Solutions with a strong analytical and communication background. While closely monitoring drone incidents throughout the world, she focuses on creative thinking, branding, and effective content.