Rogue drones smuggling contraband – weapons, drugs, cellphones, etc. – has been an issue for years, but it seems to have significantly spiked in the past month or two, with high-profile recurring incidents around the world.

Most recently, 20 people were arrested after an eight-month investigation into drone smuggling at a South Carolina prison. The details are incredible. CBS News reports:

“…officials have seized an estimated 100 pounds of tobacco, 13 pounds of marijuana, 843 grams of methamphetamines, 114 grams of crack cocaine, 49 grams of cocaine, 12 drones, three guns, two knives, 25 cellphones and $6,393 in cash. Authorities also discovered abandoned drones in the woods near the prison’s fences that contained about 100 grams of meth and five pounds of tobacco.”

During the latest sting, there were multiple, separate groups trying to fly drones over the prison fence simultaneously! 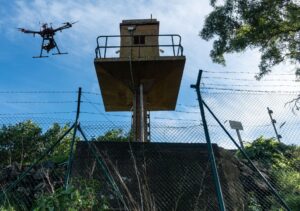 Colombia recently had a similar issue at the maximum-security Tramacúa Prison in the northeastern city of Valledupar, according to DroneDJ.

“That drone delivery activity was described as transporting the usual kind of contraband into the prison – notably cell phones, SIM cards, tobacco, and cannabis.”

The province of Málaga, in Spain, was also hit last month. EuroWeekly reports that two drones were observed flying over the Alhaurin de la Torre Penitentiary Centre on two consecutive days in January 2022. The article notes that Penitentiary Institutions recorded 14 incidents involving drones being detected flying over Spanish correctional facilities. Imagine how many were not detected…

Back in September, a prison in Ecuador was targeted with explosives, allegedly by a drug cartel, according to DroneDJ:

“…three drones dropped their explosives payloads on the roof of a prison facility in Guayaquil. According to a tweet posted by Ecuador’s penitentiary administration, the strike hit the Regional Guayas 4 rehabilitation center next to the main prison holding most inmates. Included among those are members and leaders of gangs affiliated with rival international drug cartels, particularly those in Mexico, which may now be using drones to strike at one another.”

Canada has not been immune. Wings magazine wrote that police in Winnipeg found drones were dropping massive quantities of drugs into federal prisons – including several million dollars’ worth of methamphetamine, fentanyl, cocaine, marijuana and other drugs. Approximately 40 firearms were also seized.

There were some of the recent biggest incidents, but the list goes on and on and on…

Everyone in the prison sector recognizes that rogue drones are a major problem, but many leaders seem unsure of how to proceed. Budgets are often tight, but what makes more sense? Proactively spending money to stop the inevitable drone intrusions, or retroactively funding large investigations into massive smuggling operations after malicious acts were committed?

Even security teams that have decided to act may be confused as to the best course of action. Direction finders, cameras, acoustic solutions and radars may have some utility for detection, but what is their value to prison security teams without the ability to identify and precisely locate hostile drones AND their pilots? Also, authorized professionals should be able to mitigate rogue drones being used for illegal activities. Absent the ability to capture the drones (and their expensive cargo) and find the responsible pilots, the cycle will continue.

Kinetic mitigation solutions can cause collateral damage when projectiles are used and could cause the contraband to plummet down to the prisoners. Jammers can be effective at mitigation, but they can disrupt a prison’s (and other nearby) communication systems. Also, when jamming ceases, the drone pilots could regain control, and returning the drones back to sender means not capturing the contraband, likely leading to future attempts.

Counter-drone, radio frequency-based, cyber-takeover clearly can play a role here. Prison security teams will be able to automatically detect, identify, locate and control rogue drones, land them safely, confiscate the contraband and even identify the location of the pilots.