The Three Sides of Counter-Drone Cybersecurity

The issue of cybersecurity is expanding and evolving in the drone and counter-drone spaces. Traditional cyber concerns in the drone world referred either to the vulnerability of drone data and operations to cyber-attack, or the role that drones can play in perpetrating cyber-attacks.

But nowadays, when it comes to cyber and drones, a new dimension has arisen. Offensive cyber techniques have proven to be an effective method for facilitating end-to-end rogue drone detection and controlled mitigation. 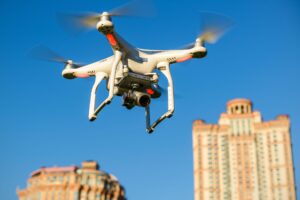 Let’s take a quick look at all three areas relating to cyber and drones.

The vulnerability of drones to cyberattack – such as when internal enterprise drones, or external supply chain partner drones, are hacked for nefarious purposes – has long been a concern. In 2011, an entire fleet of American unmanned aerial systems (UASs) were infected with a mysterious keylogger. In 2015, drug traffickers succeeded in hacking U.S. surveillance drones at the U.S. border, so they could bypass them and smuggle contraband into the U.S. These potential drone hacks remain a concern, with DroneDJ recently reporting that there is optimism that blockchain technology could help alleviate this worry.

A Booz Allen Hamilton report on cybersecurity highlighted the role that external drones could play in corporate or governmental espionage, sabotage and surveillance:

“The use of drones as rogue Wi-Fi access points may be one of the most simplistic yet effective tactics for targeting individuals. Drones equipped with a device like a Wi-Fi Pineapple can be placed in proximity to a targeted company and used to harvest credentials, perform man-in-the-middle attacks, and conduct network reconnaissance. Even users connected to legitimate company access points could conceivably be forced to connect to the drone’s Wi-Fi if the target’s network does not prevent forced de-authentications.”

This is because takeover techniques have emerged and are being deployed as the centerpiece of an effective defense against unauthorized drones engaged in attack, smuggling or espionage.

Cyber-takeover systems detect and penetrate the unique communication signals used by commercial drones. Once detected, a cyber system can extract the drone identifiers for a classification process that distinguishes between hostile and friendly drones. Such a system can also extract the drone position with GPS accuracy, including the take-off position near the pilot in real-time.

During the mitigation process, the takeover process commences, and the pilot loses all control of the drone, including video and telemetry information, and cannot regain it.

The innovative benefits from cyber technology methods have changed the game – “cyber” is now an important part of the anti-drone security solution, rather than being a drone problem.

What do you think about when you hear the word “cyber” in relation to drones or counter-drone measures?

Jeffrey Starr is the Chief Marketing Officer at D-Fend Solutions. He brings a track record of generating revenue and building market leadership through visionary business strategies, inspired marketing and insightful direction for rapid and sustained growth. Fast-growing companies in the information, security, compliance and risk management sectors have employed Jeffrey in CMO and executive roles.